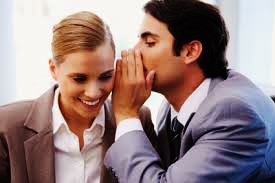 Gossip in the Workplace-The Expert’s Opinion Versus the Spiritual Master
Those who are called experts share some of their revelations about gossip in the workplace in the next four paragraphs and after that follows the judgment of the spiritual master. A professor of communication says “lets foster an ethical environment that encourages positive forms of gossip not how to eliminate it.” When employees share humorous gossip with institutional insights while relaying stories of mischief and poking fun at each other, it can help employees and new hires learn a lot about their organization and its co-workers in a useful way. The professor is saying not whether to gossip, but how to ethically and skillfully do so avoiding the label of being a “gossiper” which can more likely stick to women than to men.

They say men and women gossip equally and some research says it as more nuanced and can sometimes be useful and not something typically negative but an informal conduit for receiving judicious tidbits of information that can change opinions of co-workers and their jobs. There are several types of gossip. One with positive views of the workplace and the people in it and one that’s negative. The negative second type of behavioral gossip, the experts say, usually obstructs the effectiveness of the association and hurts the reputations of its workers, such as when some women talk about the juicy romances of co-workers or who is sleeping with who, her wardrobe and the height of her heels and so on.

Frequent gossipers showed to be more powerful and have dominant, masculine and aggressive behavior and less submissive or soft-spoken qualities. So for the woman who gossip they may seem to hold more power in the place of work. They are also shown as being not well-liked and emotionally distant. Men may gossip about someone’s raise and how much money they make, with more emphasis on personal skills and competition, while focusing on co-workers who have more privileges than themselves. Gossip, the experts say, can be positive or negative depending on the motive of the person gossiping, the context and the probable outcome.

If you do not hold a position in where others look to you for advice you must always be tempered with understanding avoiding hurt to others.

In contrast, a spiritual master from India says there is no such thing as positive gossip. These opinions and others were presented about gossip and these are the answers from the teachings of a great spiritual master from India. The master says, “even among well-meaning associates or co-workers gossip can not have a favorable result for the person being talked about; it makes the person feel ashamed, angered, depressed and strengthens his obstinate behavior. ” The master was very emphatic when he said “When anyone confidentially approached me with any so-called disgraceful or shocking discovery, I made it very clear if it cannot be repeated to everyone, I am not interested in hearing it.” If anyone knows a secret about someone or has a grievance about another, he should keep silent or confront the person directly instead of maligning the suspected wrongdoer for the joy of gossip or be driven by an uncontrollable obsession of impulsive talkativeness.

Informers and self-appointed critics have no excuse or right to expose publicly the faults of others by malicious taunting, exposure or gossip as to do so is a sin against God. Remember it is God who dwells in the bodily temple of the righteous and the error-stricken. The affection for gossiping is the affection for meanness to harm the souls of others. Criticizing and gossiping about the ethical weaknesses of co-workers is a wicked spiritual crime. When the moral errors of anyone is unduly exposed they become shameless and desperate and make no effort to be better and flaunts a devil-may-care- manner. However in a some cases, just the fear of publicity and exposure will keep co-workers good. Once publicized even a slight weakness in a co-worker tends to increase and discredit proportionately to the notoriety given to it. Mundane minds are indeed morbid and especially thrive on distorting the facts, exaggerating the words of co-workers out of context without consideration of relevant circumstances. Negative rumors are a psychological defect to most people which causes them to repeat the errors of others without giving the accused co-workers the opportunity to refute the accusations.

Every time you gossip and criticize anyone you are automatically in tune with that person and you are pulling out the bad karma from him or her and are taking to yourself the bad qualities of that person. To pour the salt of acerbic gossip into the open character wounds of others is purposeless. We must instead administer the healing salve of appropriate support and sympathetic advice to the error-stricken. Those who gossip cannot remedy moral errors with gossip, persecution, taboos and commands.

Did you know that gossiping seems to act similar to an energy drink for people who crave this type of titillation. Those same gossipers should gratify their lust by shouting openly in public all their secret sins they committed themselves. Such disclosure would be unbearable to them even for a minute. Anyone who cannot stand up to such scrutiny themselves should not take pleasure in any way exposing their co-workers. It is not the way of the wise to expose the moral flaws of anyone by bringing them senseless embarrassment.

Many overly liberal websites and newspapers are delving in unscrupulous sensationalism with an uncharitable agenda and are not becoming the healers of immorality, but instead they are becoming scandalmongers. Publications and journalists who love to spice up reporting and pickle gossip to put up their own agenda or sell more newspapers are committing a spiritual crime by catering to the degraded taste of readers who are gossip lovers. To call forth God’s judgment is to gloat over the faults of one’s fellow beings and by critiquing them in a spirit of intolerance. Pointing out the mental dirt in others is a metaphysical and psychological error, instead one should clean out the dirt in the mansion of one’s own mind. Those who are so eager to reform the behavior in others must learn to live thoughtfully before precisely discerning how to place understanding in the lives of anyone prone to error.

Critical people themselves cannot stand criticism as they lack humility. Judges who self-elect themselves critics of others quite effortlessly forget to analyze their own internal failings. Thinking that they are always right they are amplifying the mistakes of others to diminish the enormity of their own faults. Hypocrisy and insincerity taint the character of anyone who is not interested in overcoming his weak points, yet bears aversion for such limitations. If he is thrilled in ripping apart people who suffer from the same type of character flaws he has, he is hiding his own defects behind the scorn of gossip and criticism and is a coward and a sadist. The irony is that unprincipled corrupt people who enjoy chastising others about their personality flaws typically posses the identical flaws themselves. The same things that irritate people most in others is most often located festering inside themselves. Unable to honestly look at themselves, such persons suffer feelings of overwhelming gilt and find pleasure in scathing others to vent their frustration and find pleasure in scathing others snidely hiding from their own reprehensibility and themselves.

Some people that are quick-tempered and they themselves cannot tolerate anger in anyone, and the greedy, are unable to put up with greed in others. An established immoralist condemning an immoral person or a liar rebuking a liar has the same effect like a gunshot on a bullet-proof vest.

Anyone who assumes that he can make right the expressions of ignorance in other people should excise with equivalent zeal every bit of ignorance from inside himself. After one has obtained his own wisdom he will then be well suited to eliminate ignorance from the minds of those he desires to help. It is spiritually profitless acquiring the habit of analyzing people while he who criticizes makes of himself unlikable company. When you offer criticism even if constructive is risky if you do not hold a position in where others look to you for advice.  You must always be tempered with understanding avoiding hurt to others. The opinions of those who are not at all qualified to assess critically, particularly those who condemn and carp just to invent discord for the wicked pleasure should be totally ignored. There are two distinct ways to neutralize unworthy critics, one is to be lovingly indifferent or abjectly uninterested in them.

It is God’s Sole Impartiality in judging with absolute fairness with no base passions of what is right and in His compassion, God never openly criticizes anyone—He silently criticizes through one’s own conscience which is louder then words and more piercing than all lectures from human crusaders. Standing the barbs of criticism is a mark of spiritual strength and being humble whether they are just or unjust. Criticism that is justified with a continuous effort to improve one’s behavior and way of thinking, add to one’s self the characteristics of a saint.

If you suffer from talkativeness or are a gossiper bite your tongue and heed these words. Small minds talk about people all the time, average minds talk about events, great minds talk about ideas, and the wise man doesn’t talk. The wise man learns and does not talk because he knows he will not be understood. The wise man becomes quiet and silent while becoming acutely aware of all the motions of life and he never complains. He realizes that all things in life sub serve a divine purpose. When you stop gossiping, complaining and criticizing wisdom begins to percolate into your being and you begin to understand everything.