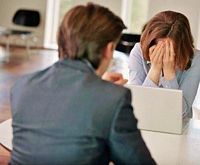 Are You Touchy or Over Sensitive from the Criticism & Barbs of Co-workers?

What is the psychology of touchiness? Touchiness itself is a thought of being insulted that runs through our minds, from which our nervous system rebels in opposition against it. There is an art to not being touchy and over-sensitive. Mastering it is an important development for your spiritual progress. Those who are spiritually sensitive are different from those who are emotionally sensitive as they remain aloof from the annoyances of psychological compulsions and are keenly watchful of their own feelings. Spiritually well-developed people can distinctly see the faults in others and with true understanding automatically leave non-understanding people alone. They don’t waste time or effort with the ones who have no willingness or ears to hear.

Being touchy or over-sensitive shows a lack of control over the nervous system. In analyzing its psychology being touchy is the result of an inferiority complex, misunderstandings and of an ungoverned ego. People have different reactions.

Some people react with no outward signs of irritation but anger seethes inwardly while others more obviously express their emotions instantly showing it in their face and eye muscles while they angrily reply as they come back with a harsh retort of their tongue. In whichever case being overly sensitive or touchy makes us miserable because it creates negative vibes which, at the same time, harms others adversely. Touchy sensitiveness tortures your nervous system like a ghost that haunts you making you feel the whole earth is full of enemies. This person should understand that his pain is self-inflicted and not foolishly blame others. Even though there may be a good reason to be upset for being mistreated, he who in spite of it controls himself in such circumstances is a master of himself.

When you’re criticized, let them criticize as much as they want, just remain indifferent, untouched as if you were dead to their unjust barbs. They will soon lose their enthusiasm to criticize. To demand respect and kindness from others is futile; we must learn to merit it instead.

Being touchy is a common trait among human beings. Touchiness paralyzes the good will of people who try to give constructive criticism. When people are not at peace with themselves they become touchy. To be great is to be bighearted no matter how offensive others are to you.

Uncontrolled irrational emotion will blind the eyes of wisdom and good judgment. The touchy person perceives himself as feeling rightly, thinking rightly and acting rightly even though he or she might be in the wrong. The majority of these people think that self-pity will bring a little relief when criticized but using self-pity the way a drug addict uses cocaine makes one become more steeped in the habit. Be as strong as steel against touchiness and never harbor self-pity or be sensitive. The over touchy and sensitive person habitually suffers in vain. Usually no one has a clue that he or she has a cause of distress much less of what’s bothering them.

Whenever the emotion of sensitiveness appears try to conquer that feeling immediately. If something upsets you, understand that you are surrendering to unnecessary sensitivity and that you should not give in to it. Never let anyone catch you in a touchy mood. Our faces reflect our inner-self and the source of this feeling comes from the heart which reflects on our faces, that’s why it should be an altar of peace.

Share on FacebookShare on Twitter
« Protocol For Friendly & Unfriendly Co-Workers Wow! Look What happened In Seattle With the Raising Of The Minimum Wage »